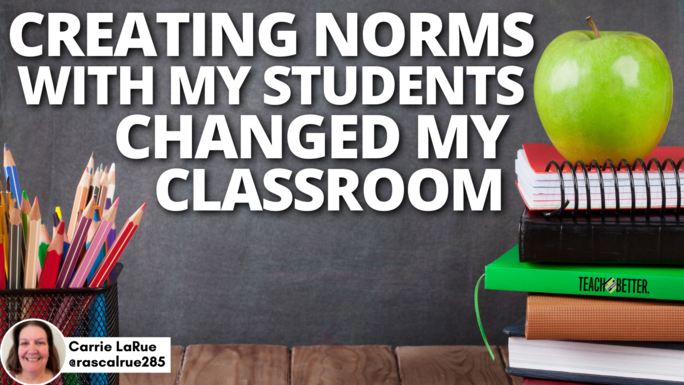 Creating Norms with My Students Changed My Classroom

For 16 years, most of the students I taught were in 6th grade. When they came to us, they were experiencing a freedom middle school gives that elementary did not. They really push boundaries and limits. Then, I moved to 7th and 8th grade, and now I teach 8th exclusively. I had heard about students setting their own norms, but as a control freak, I wasn’t sure how it would work for me. Two years ago, I decided to try it with my fairly responsible 8th grade classes. I was pleasantly surprised with how it worked.

I told them I wanted to help them explore their freedom, and part of that meant setting some group norms. It was their turn to look at classroom expectations. Click To Tweet

Give up classroom control?

I am a first-born rule follower. Having the norms (expectations) not being ones I’ve developed, written on poster board, and hung on the wall? That was a huge step for me. But I took a deep breath and took the step. In January 2020, I talked to my 8th graders about their final semester at middle school. I explained that in high school, they’d face more freedom than they had at middle school, just as there was a difference between elementary and middle school. They talked about their concerns with what high school could bring; we also talked about self-regulation and expectations of them being able to do that.

This conversation organically morphed into what rules they set for themselves.

This, I must admit, threw them for a loop. They weren’t sure what I meant. We started by discussing rules I set for myself—I get to do something for me when I get home for 20 minutes just to unwind. Then, I do those things I don’t like to do. Maybe that’s laundry, running the vacuum, grading, lesson planning. We talked about things they do to “fill” themselves versus what they do that takes from them. We talked about how even though I have “rules” for myself, they might not fit the family the best. If I get home at 5:45 p.m. and we need to eat by 6:30 p.m., taking 20 minutes might not be what’s best for all.

Next, we talked about how we could apply that to the classroom. What rules do we currently have in the classroom? Why are they in place? Which ones make sense to them? Which ones don’t? (I had to put on a bit tougher skin here. I wanted to explain each one, but I just listened without a lot of comment.) I tried to act as a facilitator rather than a participant. Now, they are thinking about rules, and some even said they didn’t like rule X, but they understood why it was in place.

Creating Norms with Students: Deep Understanding of the WHY

The next step surprised them greatly. I told them I wanted to help them explore their freedom, and part of that meant setting some group norms. It was their turn to look at classroom expectations. In January, we as teachers review and adjust our expectations to refresh students’ minds. Why not let them have some control in what our norms were?

They were ecstatic. A few each class period started saying how if they got to make the rules, they’d have NO rules. I was very pleasantly surprised by how quickly classmates shut that down, and how much the students respected each other (I’d like to think that mutual trust and respect we’d already been practicing had something to do with this).

Creating Norms with Students: The Process

I started with a clean document on my SmartBoard and I took suggestions from students. I told students as long as it was legal and not against school rules, I’d write it on the board. This is where the understanding of WHY came in to play the most. Some of the norms suggested broke our school rules. Students could look up in the handbook when I asked them to check, and I explained we couldn’t alter those.

I did tell them this was a time we could have a conversation with our principal on why these rules were in place—it would either result in a deeper understanding (not necessarily an agreement) or begin a conversation about a potential rule change. This was an eye-opener for these students, and they did take some questions to our principal in a very respectful way.

While students called out suggestions, I did ask clarifying questions.

Students did that with each other, too. I had students asking why someone would want what they had suggested (we had to work on how to do this respectfully in some cases). This was a very interesting part of the process for us as students learned about each other. They also learned how to more clearly say what they meant. They discovered they didn’t all understand the same statement in the same way.

While this seems like it would take a long time, this really only took about 15-20 minutes. I added a few—my one non-negotiable norm is that students will have an independent reading book with them as it is an ELA class. For other classes, it might have something to do with safety (science, for example). I told them right off that it wasn’t non-negotiable and why. Students also know where to find the independent reading books they can use (but do get a small ding on their responsibility SECD report after multiple uses).

I was surprised at the norms they requested. One class wanted 5 minutes at the beginning of class to talk—not to each other in small groups but as a class to see how they are, much like a status of the class. One group wanted to be able to sit wherever they wanted when they came into the room (I always have had seating charts).

Now, I’d have to explain because of COVID and contact tracing we can’t do that. All but one class that first year asked to include a norm of “Be respectful” in some form. That class said it should be understood and not need written. It was my class with the most disrespectful behavior. We talked about their behavior, and that I would, since it should be understood, expect them to uphold the schoolwide expectation even if we didn’t include it. Some wanted to be able to listen to music whenever they wanted. We refined that one after talking, and put some stipulations regarding volume and impacting work completed.

Last, we voted on the norms by a fist to five.

Any norm with all 4s and 5s was an automatic keep. Any norm with any 3s was discussed. Benefits? Drawbacks? Did it need reworded? And then we voted again.

Any norm with all fists and 1s was an automatic discard. Even if there was a single 3, 4 or 5, we discussed it. We revoted. On the revote, the majority determined whether we kept or discarded the norm. We found that sometimes norms needed combined.

Creating Norms with Students: The Change This Created

I posted these norms in Google Classroom (I have a Classroom for each class period rather than one large one). I had them on the SmartBoard when students walked in for the first two weeks and on Monday for the next two. We’d briefly review them. When a student broke a norm, I’d refer to the one violated and remind the student of the discussion had with it during the voting.

Students often held each other accountable. I also was able to remind them these expectations for behavior were the product of what the class wanted and were for the greater good of all. These weren’t arbitrary rules set out without thought, and they weren’t set out by me. This was actually one of the strongest benefits as students took ownership.

Classroom management overall hasn’t been a struggle for me most of the time (let me emphasize MOST). My classroom is structured but not rigid (I hope); expectations are clear and consistent. Having students develop the norms might have been more difficult for me as I had to remember what we’d changed. Sometimes, I’d start to tell a student that XYZ wasn’t ok in my class, and then I’d catch myself because we’d added it to the norms. Students would laugh; I’d laugh. They saw me processing the change and respecting what they requested. 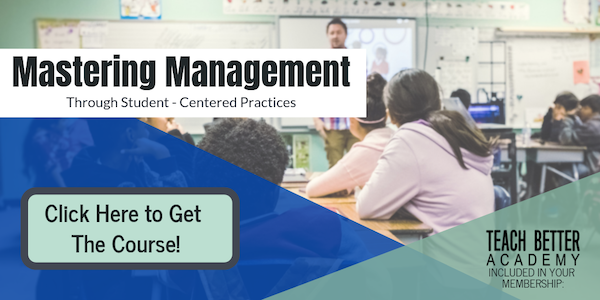 My principal asked me if I’d do this at the beginning of the year. I always so no, but I wish I’d taken time to do it at the beginning of 2nd quarter with this particular group of students I have this year. I believe it’s important to develop relationships and trust between teacher and students and among the students. Without that trust and the relationships, the norms students set may not work as well. I don’t think students will discuss them or take them as seriously. That is my humble opinion; you might find this differently.

I have done these with all my classes each year; I honestly regret doing this with one of my classes last year. They weren’t mature enough to handle this; they didn’t respect the norms. Halfway through the second semester, we reviewed the norms and talked about why they weren’t working. They were honest enough to tell me they just didn’t care about them or rules in general.

I told them it worked both ways. I’d be glad to go back to how it was if they chose to not follow the norms they set; a few students told me it wouldn’t matter because they really were going to just do what they wanted. You might have figured out now, this is the class that said respect shouldn’t be a norm. We went back to my expectations, which did include respect and didn’t include music during work.

In some ways, I think it made the classroom a safer place for them. It also took away some responsibility they didn’t want. I am a true believer that you can’t force responsibility on someone who doesn’t want it.

This process is how we’ll begin our second semester this year. I’m excited. I’ve told students we’re doing something they rarely get to do at school, but I haven’t talked to them about all of it. Having the opportunity to self-discipline is something we don’t allow our students very often. I’m looking forward to this!

Carrie LaRue is a second-career teacher at Royster Middle School in Southeast Kansas, where she has the privilege of instructing 8th graders in reading and writing. After a short stint in journalism, she returned to college to earn a certification in education and went on to earn a Master’s in Literacy from the University of Missouri. She is passionate about creating strong relationships with students (#reachbeforeteach) and their families. Her students know she loves to read, cook, travel, and do counted cross-stitch when she isn’t teaching them.