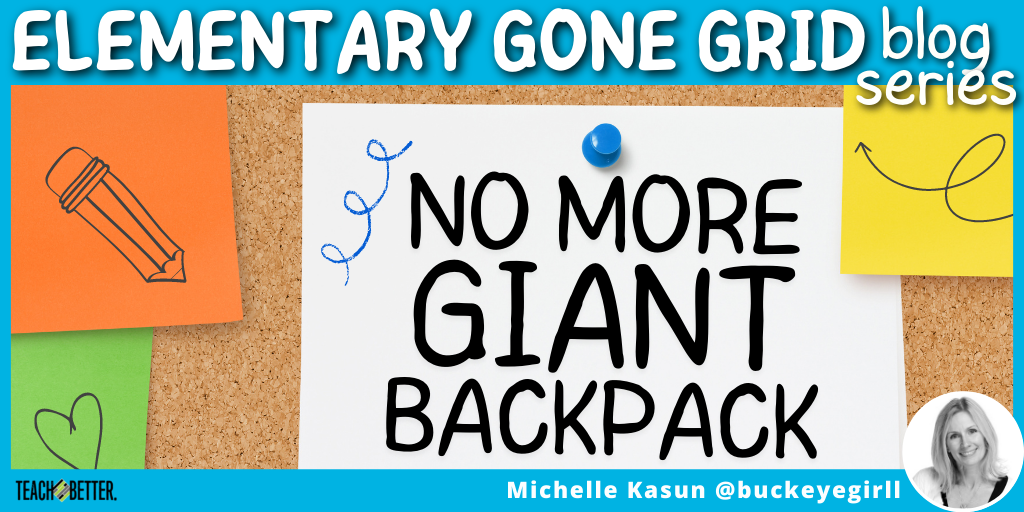 I recently saw a teacher meme that showed a man with a GIANT backpack and the caption, “When you keep adding papers to grade to your bag in hopes that you will finally find time to grade them.” Can you relate? I sure can! That is, until I started using the Grid Method. 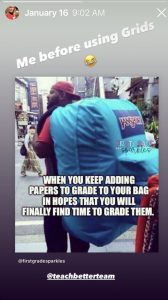 For the first several years of my teaching career, I was just like the man in the meme. There is not enough time in a teacher’s day to accomplish all that a good, effective teacher sets out to do. I was always behind with grading—which goes against every fiber of my Type A being. But there was no way I was going to forego valuable learning opportunities for less paperwork.

The giant backpack was but one factor, though, in my quest for time. I was also overwhelmed with reaching each student, as my class was a blend of 3-5 grades. I was not only differentiating within grades but also across grades. Delivering content within this context was a struggle and another time consuming endeavor.

So, I took to the internet in search of the magic formula—the secret sauce—of those teachers who never work through their lunch break, always leave at 4pm, never take anything home and do all the fun things over the weekend.

My research uncovered a few good ideas that worked…a little. I made small improvements over a couple of years but wasn’t where I wanted to be yet.  Meanwhile, I had discovered Teacher Twitter and was building a fantastic PLN (Professional Learning Network). One evening I saw a tweet from a fellow teacher that mentioned how excited he was to start using the Grid Method.  This piqued my curiosity so I bookmarked the link and then promptly forgot about it.

I made grids for the coming school year. The Teach Better Team was so helpful in answering any questions that came up as I was building them. Click To Tweet

A few months later, I discovered the Teach Better Talk podcast. The lighthearted banter between Jeff Gargas and Rae Hughart along with their compelling guests, who were fellow educators with similar goals and struggles, had me hooked immediately. I listened to every episode, even going all the way back to episode 1. One morning, I was on my way to school, listening to the pod, and the grid method was mentioned. All the things they said about it made such fantastic sense! It wasn’t until much later that day, as I was mulling it over, that I realized I had bookmarked it long ago!

From there, I embarked on a journey to learn everything I could about grids. I took the free course in the Teach Better Academy but the thought of making my first grid was a little overwhelming. Plus, I didn’t have time! But then COVID hit and a self-paced mastery framework seemed like the only way to proceed. I made my first grids for math…but was still overwhelmed with grading. Clearly, I was doing something wrong so signed up for the live course offered in the summer of 2020. I had SO much fun with a great group of teachers all learning straight from Chad Ostrowski, the Grid Method’s creator! I not only learned the whys and hows, but I also figured out what I had done wrong the previous spring that had led to so much grading.

For the rest of that summer, I made grids for the coming school year. The Teach Better Team was so helpful in answering any questions that came up as I was building them. By the start of the 20-21 school year, I was ready to go and have never looked back. 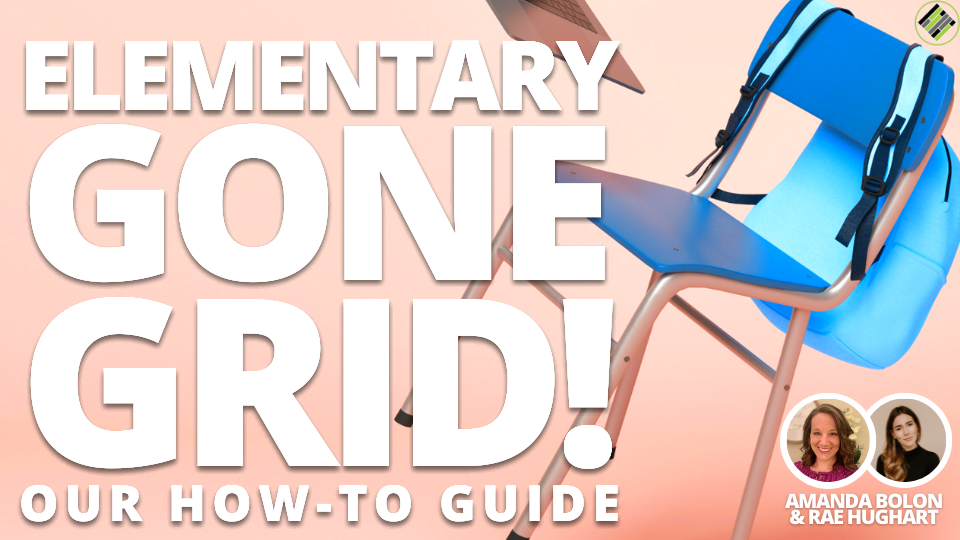 Using the Grid Method: Why are grids so effective at countering the above mentioned frustrations?

So, instead of following a curriculum with lessons jumping from one topic to another, I took a power standard (see Dave Schmittou for more on power standards—another game changer!) and built a unit/grid following Webbs Depth of Knowledge with learning opportunities that led ONLY to mastering that standard. I used our curriculum for some learning opportunities. I also used other resources to ensure we were focused only on fostering mastery for that particular standard.

2. Assessments are strategic and timely.

Each box within a grid includes a short lesson (called learning opportunity), an activity to practice what was taught in that lesson and a short assessment (Quick Check). These activities and quick assessments are strategic in that they are short and focused, there is no busy work involved. They are chosen specifically for the student to show whether or not they have mastered that particular concept. It’s not a worksheet of 30 math problems (like in my first attempt at grids). If a student can prove they know how to multiply multi-digit numbers by doing 5 problems, why ask them to do 25 more?

3. Students are assessed often via conferencing with the teacher, quizzes at the end of each level, and a final test or project at the end of the unit.

During these quick conferences, the teacher simply asks a couple of strategic questions to ensure the student fully understands. If full understanding is not proven, then the student needs a little more practice before moving on to the next box in the grid. Same with the quizzes at the end of each DOK level. They do not move to the next DOK until they pass that quiz.

4. Students work at their own pace.

This allows the teacher time during class to meet with individuals or small groups of students who are in the same spot, offering remediation when needed and moving those quick learners along so that their learning never stops.

5. Enrichment opportunities are available for those quick learners.

They are great helpers to other students who have questions and level 5 is an enrichment project for those rare instances when a student flies through the other four levels.

At the end of my first quarter using grids, I was so ecstatic about not having that illusory jumbo backpack. I tweeted out, “For the first time ever, I am not overwhelmed at the end of a grading period…” and I thanked Chad, Dave and the Teach Better Team for saving my sanity. Looking back, that was a bit selfish. I should have thanked them for providing the means through which my students learned more than ever before.

Michelle Kasun is an educator who takes her responsibility of molding young minds very seriously. She has had the privilege of teaching many different subjects for grades 3-12 but just recently relocated from Oregon to Montana where she is finally teaching the age and subjects she is most passionate about – middle school ELA and SS.

Michelle is proud to be a founding Teach Better Ambassador. She is currently pursuing National Board Certification in Early Adolescence ELA and is also a certified fitness instructor. When she is not geeking out on all things education, she enjoys horses, hiking, group exercise and family time.